I was invited to run a singing workshop for festival-goers at the International music festival Womad.

Kirsty was invited speaker at the Street Music Conference. This event explored an important but often neglected aspect of public culture and community construction: street music. The conference drew together new knowledge and practice generated by funded research projects across Connected Communities with work across a number of academic disciplines as well as the creative sector. Following Connected Communities established practice, the conference provided a place for dialogue between academics, independent researchers, musicians, performers, and the arts and cultural policy sectors.

Dr David Atkinson,  Honorary Research Fellow at the Elphinstone Institute Aberdeen, author of The Anglo-Scottish Ballad and its Imaginary Contexts (2014), and co-editor of Street Literature of the Long Nineteenth Century: Producers, Sellers, Consumers (2017)

Prof Trevor Herbert, Emeritus Professor in Music at the Open University, author of Music and the British Military in the Long Nineteenth Century (2013), and editor of The British Brass Band: a Musical and Social History (2000)

Stefano Montes, Researcher in Culture and Society at the University of Palermo, convener of People and Cultures of the World (2019)

A singing workshop in Brussels hosted by Kirsty Martin and Dorothy Oger in celebration of love, hope and resilience, three years since the Brussels attacks.

Kirsty taught ‘Common Ground’. She says of the song, “this song is woven from three different, yet complementary, strands! (…) Shortly after Jo Cox died, I wrote a song based on her maiden Parliament speech that includes the now iconic phrase “We are far more united and have far more in common with each other than things that divide us.” (…) It wasn’t until I discovered the beautiful poem “For Love” and the force for positive change that is Dorothy Oger, that the original song came back to me reimagined. (…) Dorothy Oger wrote the poem as a response to her friend being killed in the terrorist attacks in Brussels on March 22nd 2016. (…) The third element of this song comes from Maori words and expressions meaning “to connect in meaningful ways”, “respect”, and “My friends! This is the essence of life!”.

Dorothy and Kirsty shared this beautiful song in the spirit of “having more in common”, of “standing for love” and in celebration of “connecting meaningfully” continuing to be expressed in many different ways.

Hear Dorothy Oger reading her poem I Shall Stand for Love here.

I created this song collection for the far-flung choral community – and beyond! These songs explore several facets of revolutionary thought, as interpreted poetically and creatively, through archetypal themes; of equality, of ecology, of justice and respect, of personal reflective space and raw communal power.

Inspiration is an eclectic business and I have taken mine from a wealth of sources – from the more declamatory romanticism of Shelley and Blake to the raw uncompromising presence of the #SayHerName movement, via the unique creativity of contemporary poets Malcolm Guite and Dorothy Oger, Braggian anecdote, popularised demo chants, dystopian Gilead, C19 New England fervour, First Nation prophesy, and seminal Beat poetry!

These pieces, I hope, are versatile ‘songs of requirement’ that suit both workshops and performances. These songs are not ‘demo ready’ – they take time to weave together. As complete pieces, they are designed for communities who sing regularly together; and provide a hearty choral challenge for singers who are perhaps performance based.

The production of the songbook was part-funded by a grant from the Lipman-Milliband Trust.

Barking and Dagenham Council commissioned Lucy Ward to compose a song to celebrate the centenary of some women getting the vote and, remarkable women from the borough. I was commissioned to teach the song to a community choir who performed the song at the Barking Folk Festival.

Click here to watch a video about the project. 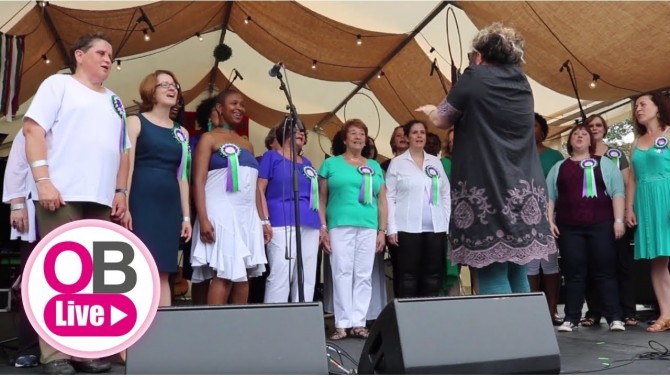 My choir Hullabaloo Quire hosted Street Choirs Festival for the second time in 2018.
Together we chose ‘Citizens of the World’ as our festival theme, a response to the mass displacement of people around the world due to conflict and ecological change and also as a celebration of Brighton as a welcoming place of asylum in troubled times.
For our massed sing song I approached Music in Detention, a charity that brings musicians and immigration detainees together to make music. We chose to perform ‘Human’ and were joined on stage by rapper Marshall Mandiangu from the local music project Audio Active.
This largescale event required me to liaise with 50+ choirs to curate a collective repertoire that would make up a gig at Brighton Dome. I also arranged for there to be guest performers including musicians from the refugee charity Best Foot Music.