I was commissioned by Speak Up! Act Out! director Angela El-Zeind to work on a song for Rebel Boob.

Rebel Boob is based on interviews with women who have been diagnosed with breast cancer and focuses on the recovery period following treatment. It is a raw, funny and honest multimedia performance.

I was commissioned by Priority 1-54 to run Theatre of the Oppressed, a theatre project for KS4 girls that focused on personal and social issues.

I was commissioned by LIFT to work as a Rehearsal Director for the London performance of Sun & Sea at the Albany.

During this piece, dozens of performers bring a beach scene to life – sunbathing, playing sports and singing. Sun & Sea is an urgent exploration of our relationship with the planet, the threat climate change presents and the dangers we face if it is ignored.

“Sun & Sea remains one of the greatest achievements in performance of the last 10 years: wry, seductive and cunning in ways that reveal themselves days or years later. This is a performance that makes the extinction of the species feel as agreeable as a perfect pop song, and as unforgettable, too.”

“A vision of a lazy day at the beach so gaspingly sad and beautiful it’ll have you fighting tears.” – ⭐⭐⭐⭐⭐ Time Out

“Sun & Sea is an intensely beautiful.” – The Financial Times

I am delighted to have been commissioned by the National Trust to compose the 2020 anthem for Springsong, an event celebrating the charity’s 125th anniversary.

The piece will be performed by twenty-two pop-up choirs, as a Singing Beacon, on May 16th 2020. The first choir will start at Alfriston Clergy House, which is the first property to have come under the National Trust’s care in 1896. From there, the Singing Beacon will pass from property to property, with each choir handing over the choral baton to the next choir! The anthem is called ‘For Everyone For ever’ and features lyrics contributed by the Trust’s staff and supporters. It finishes at Waddesdon Manor.

I will be conducting a Springsong choir at Nymans in West Sussex. If you would like to participate at Nymans please click here.

Which National Trust properties are taking part? The list below brings together the full list of participating properties. Click on the images to visit each property’s Spring Song Event Page.

Spring Song is a free event, however, booking with the event venue is essential.

END_OF_DOCUMENT_TOKEN_TO_BE_REPLACED

In 2019 my choir, Hullabaloo Quire, collaborated with the fabulous folk singer and activist Grace Petrie! Together we put on the SOLD OUT concert Polyphonic Protest at the Sallis Benney Theatre in Brighton.

I arranged four of Grace’s songs as part of the Grace/HullaCollab which Hullabaloo performed on stage with Grace: Ivy, Black Tie, Fire in your Heart and Tom Paine’s Bones.

For the gig, the choir dressed to impressed, in Fantasy Prom theme, inspired by Grace’s song, Black Tie. 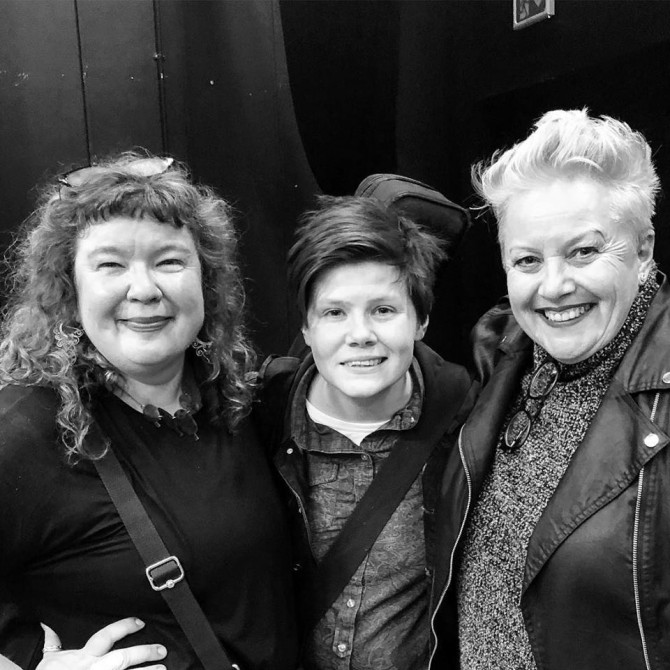 From left to right me, Grace Petrie and our MC for the night Sue Tyhurst 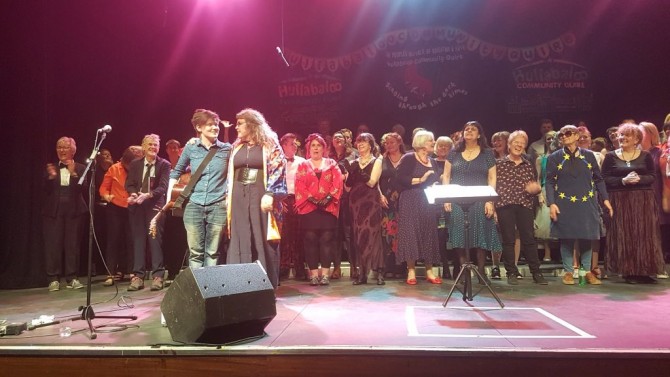 Grace Petrie and Hullabaloo Quire on stage at The Sallis Benney Theatre, Brighton

Over the years some fabulous artists have accepted an invitation to work with Hullabaloo, including – Oysterband, Lucy Ward, The Moulettes, O’Hooley & Tidow, Po’ Girl, Firefly Burning, The Galleons, Robb Johnson and The Unthanks.

In 2019 Hullabaloo Quire was invited to perform with folk legends The Unthanks at Brighton Dome. I formed Hullabaloo Quire over twenty years ago and musical collaboration has always been a vital part of what this community choir does, so we jumped at the chance!

Hullabaloo Quire live on the Brighton Dome stage with The Unthanks

Over the years some fabulous artists have accepted an invitation to work with Hullabaloo, including – Oysterband, Lucy Ward, The Moulettes, O’Hooley & Tidow, Po’ Girl, Firefly Burning, The Galleons, Robb Johnson and Grace Petrie.