Bruce... i'm god. cities fall but they are rebuilt. heroes die but they are remembered. no, this is mount everest. you should flip on the discovery channel from time to time. but i guess you can't now, being dead and... 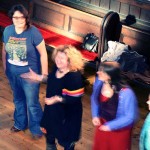 now issue a new commandment: thou shalt do the dance. i once heard a wise man say there are no perfect men. only perfect intentions. i don't think they tried to market it to the billionaire, spelunking, base-jumping crowd. the...

You measure yourself by the people who measure themselves by you. let me tell you something my friend. hope is a dangerous thing. hope can drive a man insane. i did the same thing to gandhi, he didn't eat for...

The Chalk Circle Collective presents...Revolutionary Ballads! Join Kirsty and the Chalk Circle collective in an evening of celebration of Bertholt Brecht. Frankie Armstrong brings a stunning selection of Brecht's songs, with setting by Kurt Weill and Hans Eisler, and The... 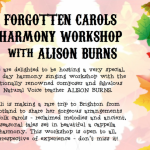 Don't miss this fantastic opportunity to spend a day in the glorious harmonious company of the wonderful song maker and arranger ALISON BURNS! Ali will be sharing some of her collection of Forgotten Carols - reclaimed and rearranged folk carols... 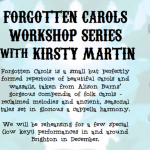 Following Ali Burns' workshop, I will be hosting a short series of Forgotten Carols singing afternoons. We will be continuing to sing the songs learned in Ali's workshop, as well as adding some new songs, to create a small but... 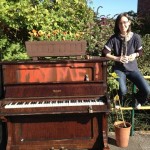 Calling Brighton (and beyond) lovers of dazzling jazz, swooning soul and rocking R'n'B harmony! I am delighted to be hosting the wonderfully talented and totally inspirational VAL REGAN, who will be running a one off HARMONY SINGING workshop in Brighton... 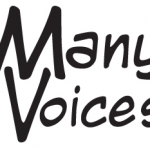 Many Voices is a  LGBTQ non-performing singing group in the heart of London. The group is managed by Gaynor & Tati who invite guest workshop leaders to facilitate the sessions. I have worked with Many Voices before, and I...

The new Hullabaloo term kicks off on Monday 7th September 2015. 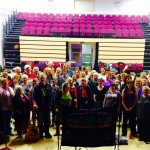 The new Hullabaloo term kicks off on Monday 7th September 2015. On Monday 14th September we are open for new folk to join us in our second open session.